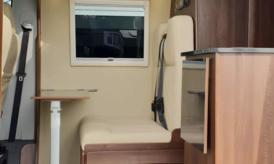 The advantage for Mclaren was the shallow depth of the C95L, giving excellent volume in a 450mm depth kitchen unit.  This allowed Mclaren to maximise the internal space for other essentials like the bathroom and shower and full width bed.

Mclaren chose the Vitrifrigo C95L with remotely mounted compressor for the additional volume separating the compressor from the cabinet gave them.  Other key features of the fridge include:

It was also important for the owner of this Mclaren Sportshome that he could run his vehicle entirely off grid and Mclaren achieved this by supplying a Banner 250Ah leisure battery, charged by a CBE control system with split charge and 230v hook up. They also fitted a 100W ZAMP solar panel – which delivers enough charge to the leisure battery to keep everything running 24/7 during UK summer time.

Service and Support for 12 volt fridges